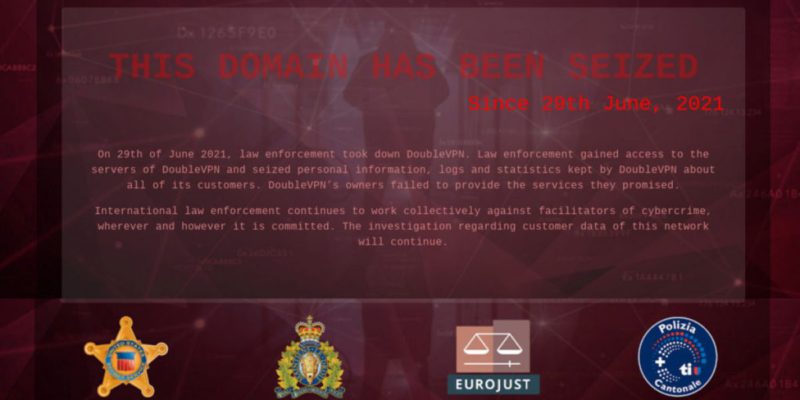 A VPN service called DoubleVPN that provides a safe haven for cybercriminals to cover their tracks was taken down in a coordinated international law enforcement operation.

The agencies stated in a seizure notice on the now inoperative site that the law enforcement has taken down DoubleVPN on 29th of June 2021. The Law enforcement got access to the servers of DoubleVPN and seized personal information, logs and statistics kept by DoubleVPN about all of its customers. DoubleVPN’s owners failed to provide the services they promised.

The criminal investigation was conducted by agencies from Bulgaria, Canada, Germany, Italy, Sweden, Switzerland, the Netherlands, U.K., and the U.S., in coordination with the authorities from Eurojust and Europol’s European Cybercrime Centre (EC3).

DoubleVPN was heavily advertised on both Russian and English-speaking underground cybercrime forums to mask the location and identities of ransomware operators and phishing fraudsters.

They provide advanced level of anonymity by offering single, double, triple, and even quadruple VPN connections to its clients, wherein internet traffic is routed through two or more VPN servers, while simultaneously encrypting the data as many times. DoubleVPN’s cheapest VPN connection cost only $25 per month.

Before the site was taken down, DoubleVPN’s site claimed that they don’t spy on their clients and they do not log client activity on their servers.