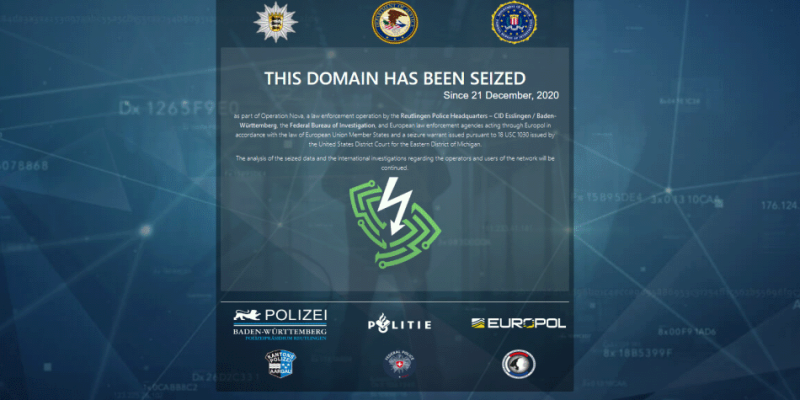 Law enforcement agencies from the US, Germany, France, Switzerland, and the Netherlands have seized the web domains and server infrastructure of three VPN services which provided a safe haven for hackers to attack their victims.

The three services were active at insorg.org [2014 snapshot], safe-inet.com [2013 snapshot], and safe-inet.net before the domains were seized this week and replaced with law enforcement banners.

The services which was active for more than a decade, are believed to be operated by the same group. It was advertised on both Russian and English-speaking underground cybercrime forums, and they were sold for prices ranging from $1.3/day to $190/year.

The US Department of Justice and Europol states that the three companies’ servers were often used to mask the real identities of ransomware gangs, web skimmer (Magecart) groups, online phishers, and hackers involved in account takeovers, thereby allowing them to operate from behind a proxy network up to five layers deep.

The three VPN providers are described as “bulletproof hosting services,” which is a term usually used to describe web companies that don’t take down criminal content, even after repeated requests.

According to the Department of Justice, a bulletproof hoster’s activities may include ignoring or fabricating excuses in response to abuse complaints made by their customer’s victims; moving their customer accounts and/or data from one IP address, server, or country to another to help them evade detection; and not maintaining logs (so that none are available for review by law enforcement).

The servers across five countries where the VPN providers had hosted content were seized. Europol has planned to analyze the collected information and start cases to identify and take action against some of the services’ users.

The investigation that has been codenamed “Operation Nova,” was coordinated by Europol officials, and led by officers from the German Reutlingen Police Headquarters.

Udo Vogel, Police President of the Reutlingen Police Headquarters stated that the investigation performed by their cybercrime specialists has resulted in a great success. The results show that law enforcement authorities are equally as well connected as criminals.

So far, no charges were announced against the individuals behind the three VPN services.